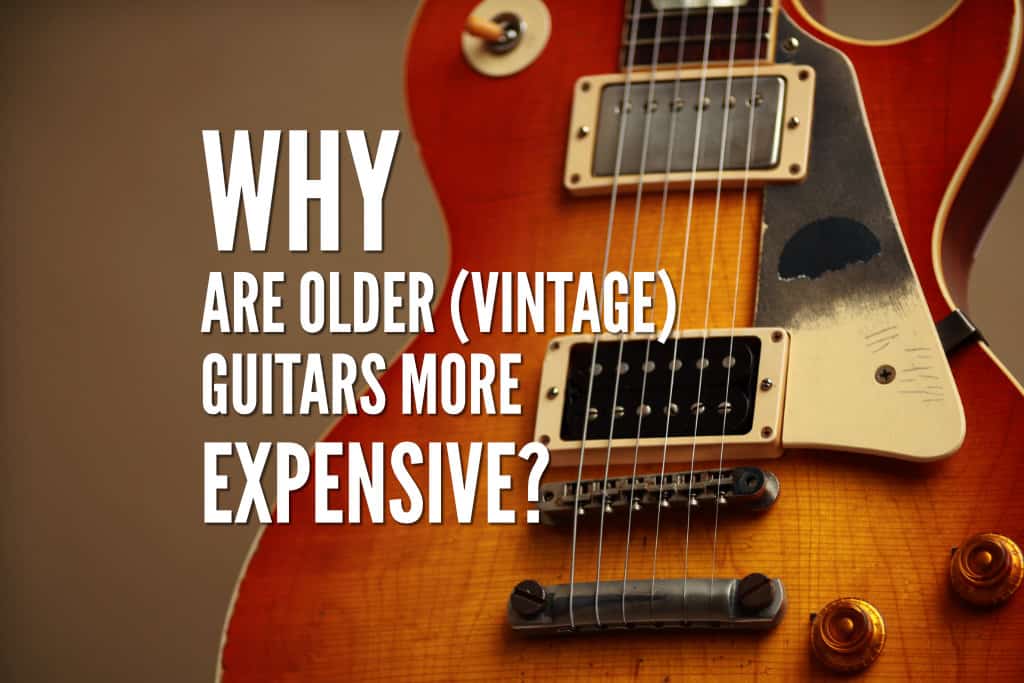 For the longest time, there has been a controversial discussion between guitar players (expert or novice), between guitar makers, luthiers and between music aficionados, especially ones interested in the legendary rock n’ roll weapon of choice, the electric guitar. This discussion revolves around whether older or “vintage” guitars have much more value than modern guitars because of the quality of the structure and quality of sound, consequently making them rightly so, more expensive. This becomes a particularly important question for someone who is looking to improve their sound as they go further and further in the journey that playing the guitar entails

But why are older(vintage) guitars more expensive?. There are three main reasons: The materials and detail that were used to make “vintage” guitars, the myths created by the famous guitarists who popularized those guitars and finally the nostalgia created by “the good old days”.

This does not necessarily confirm that older guitars will be better than new ones. In fact, one of the most common issues you can find with “vintage” gear is that due to a lack of proper preservation, the electronics consisting of it become worn down throughout the years. By consequence, their sound quality decreases considerably. Also, we have to consider the stylistic evolution of guitar-based music. In the last couple of decades, the evolution of heavier styles of such as nu-metal or progressive metal has made newer brands of guitars such as “ESP” or “Musicman” increase their popularity and demand, thus challenging the statement “vintage guitars are better”.

The most understandable reason why some guitars are more expensive than others is the wood that was used to build them. It is no secret that there are certain types of wood that are better suited to create certain desired tones for guitars. What has to be taken into consideration now is the fact that certain types of wood are now either extinct or endangered species, making them that much more expensive to get or in some cases illegal to be used.

Let us take the example of the Brazilian Rosewood. A wood that was characterized by being highly resonant (thus bringing a lot of sustain) and having a deep bass and brilliant trebles, Brazilian Rosewood became a renowned and highly sought wood, especially between the 1950s and 1970s. However, due to the increase in demand, this wood became overused and because of the amount of time it would take to grow Brazilian Rosewood, in 1992 it became a species with a high risk of extinction and became illegal to exploit it. Other types of wood such as Mexican Mahogany and Indian Rosewood have a similar story. But what this means is that there is a much higher chance that older guitars were built with top-notch wood, so much so that back in the day even knock-off brands were using incredibly high-quality wood.

Another aspect of the guitar that was different back then is the pickups. If we are talking about electric guitars then the pickups are one of the most important components to determine the guitar’s tone. Back in the days, the manufacturers used different materials and technologies to make those pickups. Whatever it was the plastic, the magnets, the covers or the insulation they all contribute to the tone of the pickup and the price of the guitar. That’s because some of the parts can’t be made like they used to or even illegal.

Also, we have to take into consideration that backs in the day, there were fewer people interested in guitars therefore there was much lower demand in those days. Now, having multiple big companies do mass productions of guitars to supply higher demands, the quality has to naturally decrease, thus also creating the conviction that older guitars have had to be better built, therefore more expensive.

Now, let’s talk about the details. What I mean by this is the amount of time and scrutiny spent on a guitar to ensure that every single part of it is made with the highest quality in mind. Naturally, the better something is built, the more valuable it becomes. With guitars, it’s an interesting thing because as time goes by the wood of a guitar becomes more and more resonant, thus making them better instruments over time. This is very much so the case with acoustic guitars but in reality, it applies to all wood. This might not seem as obvious as it should at first glance but it is possible that due to the fact that older guitars were much more meticulously crafted, with more of the work done by actual hands, the instruments in themselves were better suited to stand the test of time. And if we pair this to the fact that wood resonance improves over time, then it makes sense they would be more expensive instruments.

The last thing we have to add to this equation is the type of guitar finish used. In the ’50s and ’60s, nitrocellulose finish was the most popular finish for guitars. Nowadays, polyester and polyurethane guitar finishes are greatly favored, mainly for environmental purposes but also because it’s easier and more lasting, therefore cheaper. There is a debate stating that nitro finish gives the guitar wood a more organic way of developing resonance, while poly contains the wood, restraining it’s sustained over time. In reality, the type of guitar finish is more of an aesthetic thing rather than a functional thing for someone trying to replicate a “vintage” type of guitar. If a nitro finish is used it will decay over time, giving it a feel that the guitar itself has “lived more” therefore making it more valuable. Nowadays, people who search for a “vintage” feel will prefer nitro finish but since it is not as common, it becomes more expensive.

Funnily enough, this is probably the main reason why “vintage” guitars are more expensive even though in reality myth plays little to no role in terms of the quality of a guitar. The clearest case of this phenomenon can be found on the legendary guitar, the Gibson Les Paul.

The Gibson Les Paul was released to the public in 1952 and interestingly enough, it was designed mainly for jazz players. Even though it had some minor success in terms of sales, in 1961 Gibson had to stop producing them because most guitar players deemed them to be “too heavy and old-fashioned”. It was until guitar legend Keith Richards from The Rolling Stones began using a Les Paul Sunburst that this guitar started to gain some popularity. Seven years later in 1968, after regaining some popularity with the help of guitarists such as Eric Clapton, Gibson decided to reintroduce the Les Paul to the guitar world. What happened then? A small-time guitar player named Jimmy Page, from a small-time rock band called Led Zeppelin (yes audience, we use sarcasm) decided to go and become the biggest rock and roll band in history and thus establishing a mythical image to the now iconic Gibson Les Paul. Needless to say, now these guitars are worth a fortune.

Yes, of course, a Gibson Les Paul is a fine guitar but in reality, it is thanks to the amazing guitar players that chose this brand of the guitar as their companion (Jimmy Page actually got one because it was cheap) that a Les Paul holds so much value now. If someone idolized Jimmy Page and wanted to “walk in his shoes”, what would he think of getting first? A Gibson Les Paul. If Jimmy Page had decided to buy a 1959 Danelectro back then, what would this guitar fan buy now? You get the point. The reality is, Jimmy Page was a fantastic player and his musicality and creativity are what made him become the icon he is, not his guitar. Still, the myth created around “vintage” guitars is the reason why they are more expensive.

Nostalgia plays a huge role when it comes to guitar pricing. This might not apply to an up and coming, 22-year-old guitar player who has no particular history with guitars and music. However, let us take a look at the story of a 65-year-old man whose dream was to become a rockstar ever since he saw Jimi Hendrix tearing up the stage back in the “good old days”. For whatever circumstances in his life, he decided to not pursue that dream and instead work in something like real estate or finances. He is now a family man with a solid amount of savings and just about to retire. This is the perfect moment for him to relive HIS “good old days” and feel the rush he once felt while he was young. What does he do? He buys a guitar and not just any guitar, but a “vintage” model of the guitar he once had or the one that Jimi played that night. Either way, it will be a considerable expense, but he is not only capable of affording it, but this expense will also solidify the emotional value he has assigned to that guitar regardless of whether that guitar is well built or not.

Eventually, guitar manufacturers caught wind of this market, the market of relatively wealthy gentlemen who wish to fulfill a desire they had to put off for so long to take care of their business and their family. The result? Older guitars have become more expensive.

There might be some very solid facts, such as quality of wood, that can prove that “vintage” guitars are better instruments and rightfully so, more expensive. There might also be very solid facts that disprove this statement such as stating that nostalgia brought to an instrument does not affect how good or bad it plays. Either way, what we can be sure of is: regardless of the material in which a guitar was made, regardless of who built it, who played it and who popularized it, there is only one thing that should matter to us guitar players or even guitar lovers. If you find a guitar, you play it and it feels right if your hands feel connected to it and if your intuition gives you a good feeling, then my friend, that guitar is worth it.

Today, I will talk about an octave or octaver pedals. But what is octaver? Octaver is a pedal that combines the dry signal with one or more copies of the same signal but shifted one or more octaves...

With an extra string and an extended range, the 7 string guitar is an amazingly versatile instrument. As a classic instrument of heavier metal genres, 7 string guitars open up many possibilities for...