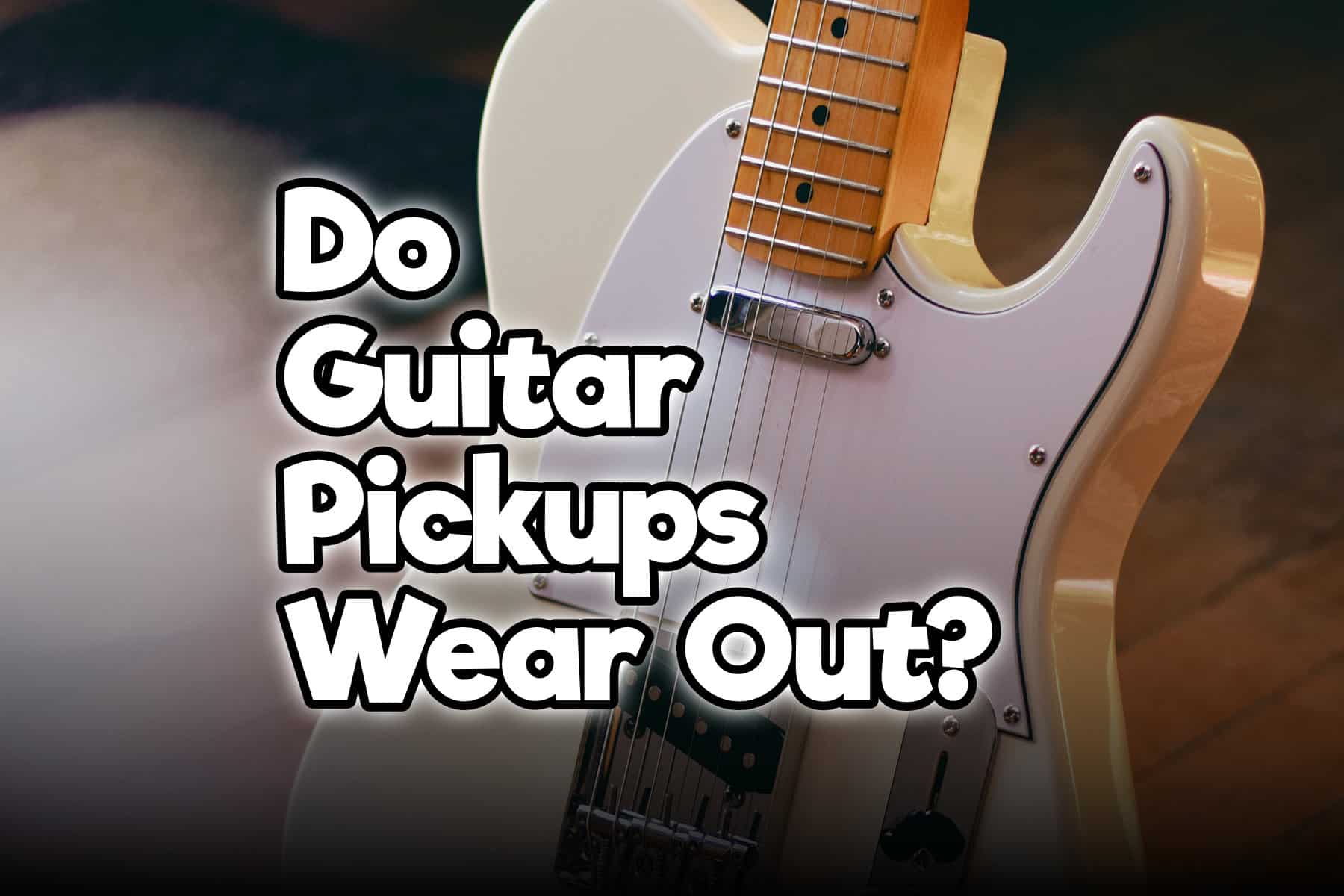 When it comes to guitar pickups there are several versions or type that you could buy or that you already have in your guitar. While some of them are based on magnets, others may be different. One of the main concerns, especially if you are looking to buy second-hand pickups or guitar is if they wear out over time.

So do guitar pickups wear out? Yes, they do, but it will take several hundred years. Since they are usually based on permanent magnets like alnico the decay of a guitar pickup is slow and there is no way that you’ll be able to register it or feel it.

However, there are a few things that can affect the performance and general functionality of guitar pickups. But let’s first explain how pickups actually work. This way we will be able to analyze if anything can go wrong or anything bad can happen with guitar pickups.

How Guitar Pickup Works And How They Wear Out?

Usually, pickups are based on simple electromagnetism. Each of the pickups has at least one permanent magnet which is usually alnico or ferrite. Around this permanent magnet, a copper wire is wound. In guitar pickups, there are several thousand wraps of very thin copper wire. And that’s mostly it. The permanent magnet will create its own magnetic field and when we pluck a string, we will cause a disturbance in the magnetic field that will induce a small current in the coil of a guitar pickup. The magnetic field will interact with this circuit and the result will be an electromotive force. This phenomenon is also called electromagnetic induction.

While this current is rather small, the signal is amplified via guitar amp and we are able to hear the well-known sound of the electric guitar. If you own a Stratocaster, you can probably see the magnetic poles that are located underneath each string. The role of those poles is to focus the magnetic field that’s created by our magnet in the pickup.

Since the construction is rather simple, there are little things you can do to break or ruin the pickup.

The period of a magnet decay is rather slow and there is no way that you’ll be able to register it or feel it. For standard samarium cobalt magnet (there are samarium cobalt pickups available also), the magnet will lose half of its properties in over seven hundred years. This means that even if you have a guitar that’s fifty years old, there is no chance that magnet will wear out or that you’ll be able to feel the difference.

The process called degaussing is used to describe a decreasing magnetic field. The process is named after Gauss, a German scientist. Finally, it is not possible to reduce the magnetic field to zero (thanks to hysteresis), so the only loss that can happen will be unnoticeable.

While we already mentioned that they use magnets, there are different types of permanent magnets that can be used in guitar pickups. The most popular ones are ferrite, alnico, and samarium cobalt. Each pickup will have one, two, or even six magnets depending on the design. The pickups created with only one or two magnets will have them placed at the bottom of the pickup usually as a bar. It will charge the pole pieces that run through the coil or copper wiring.

However, these poles can also be made of a magnet as well. If this is the idea used for the pickups, there will be one pole for each of the strings. So for six-stringed guitar, there will be six poles placed under each string.

Alnico is an alloy in iron family, and it’s made of aluminum, cobalt, and nickel, along with iron and some other metals. Alnico is mostly used in the sixties and fifties, so you would naturally find it in vintage guitars.

Ceramic magnets are another option that you might find starting in the seventies. They usually have a hotter sound and they are a lot more affordable than the alnico ones. Of course, there are other types that use neodymium which is a rare magnet used for creating several modern pickups.

But the main difference in pickups is if they are single-coil or humbuckers. Single-coil pickups will have one copper winding around one magnet. Humbuckers will usually look like two single coils put together. The reason for this is that single-coil pickups usually create hum or noise when used and the only way to avoid this hum is if you play the guitar in second or fourth position. Since middle pickup in Stratocaster is wound in a different direction, so combining two of them will cancel each other while keeping the sound of the pickups.

The idea behind humbuckers was to do the same thing but within a single pickup. So there will be two windings, but they will be wound in a different direction, each set of poles will be opposite in polarity, and equal voltage will have opposite amplitudes. As a result, they will cancel each other while keeping the signal of the guitar doubled.

There are several ways that your pickup can break, and while it is unlikely that this will happen, you should still take precautions to save your guitar. Before we go into details, you should know that pickups are quite durable and there aren’t many things you could do to break them, since there are no movable parts

One of the main issues and real problems that can occur in the pickups and that have some connection to the main question is copper wire. The wire that’s used to induct the electromotive force in the pickup is rather thin. The average pickup has six thousand turns of copper wire which is over half a mile long. What can happen here is that the copper wire can be damaged. Either by the influence of time or some other damage, the wire can break. Since it is so thin, you will have no other choice but to have your pickups rewound.

While it is not something that happens every day, it is still a possibility that the wire gets damaged or broken, so you should take extra precautions if you remove the pickups or experiment with them in any way.

Since there are no moving parts in pickups, there is almost nothing that can wear out. It is more likely that one of the potentiometers to die, than your pickup, because pots are constantly turned. However, one of the dangers of pickups is corrosion. Similar to any other metal part of the guitar, the pickups can corrode. Usually, it will happen to pole pieces because of the hand position. Due to natural sweating, pole pieces will be the first to suffer. While alnico has a rather small amount of iron, it can still happen that the tips of the poles corrode.

Usually, this won’t affect the tone and is nothing to worry about. However, it is mentioned several times that guitarist Angus Young from AC/DC had to replace his pickups several times because of the sweat. Now, he played quite a lot and sweat can damage electronics. But it is unlikely that this will happen to anything other than pole pieces. Finally, every metal can also oxidize, and that may cause some problems too, but it is unlikely that anything will be wrong with proper care of your instrument and if you clean your guitar and pickups.

It is more likely that something is wrong with pots if your guitar sounds a bit weaker.

Since steel is magnetic, there is a chance that tiny fragments of the steel wool might get stuck to the pickups. Not only that it will be extremely difficult for you to remove them and clean pickups, but they may also affect the magnetic field of the guitar. The same thing goes for metal guitar picks. They are a bad idea! When you use standard pick made of plastic, the bits that fall out while you play will just go everywhere except on the pickup. However, if you use a metal one, the tiny pieces will stick to the poles and they might cause damage over time.

If you plan on using steel wool for anything on your guitar, be sure to cover the pickups to protect them from this type of damage.

Can Other Electronic Affect Pickups?

It takes a really strong magnet or any other source will be needed for the magnet to lose its properties. Since none of us have an MRI at home (nor will they allow you to carry your guitar in hospital), there is no worry about anything happening to your pickups from any other electronic machine that you can find in houses.

The current that appears in pickups is not strong enough to cause the damage to the winding so there is only physical damage that can destroy your pickup.

How Can We Protect The Guitar’s Pickups?

We already talked about electromagnetism and the inductive current or electromotive current in the pickups. This phenomenon is explained by Faraday’s law of Induction. But this is not the last time that we will mention Michael Faraday. The other one of his discoveries used in the guitar is Faraday’s Cage. By placing a conductive material around some device, you will create an electromagnetic shield that will be connected to the ground after that.

Faraday’s Cage is used to create additional protection to sensitive guitar electronics and to even reduce the sensitivity to stray fields. Creating Faraday’s Cage in guitars is done by placing a thin aluminum or copper foil over the pickguard. This way, there will be little chance for any other “outside” force or electrical field to affect the electronics in the guitar.

With proper care, you will most likely avoid any type of corrosion or oxidation of the pole pieces of your pickups. While it may happen that the pickups get weaker over time, the reason for that will probably be the soldering or any other electronic part of the guitar. However, even if by some strange case your magnet gets weaker and somehow loses its magnetic properties, you can always take them to remagnetizing.

The damage that mostly happens to guitar pickups is physical. If you somehow manage to break the wounding, or anyhow damage the pickups, that will certainly be the reason for their weaker sound and quality. But if you play the guitar without any damage, it is unlikely that your pickups will wear out over time.

5 thoughts on “Do Guitar Pickups Wear Out?”