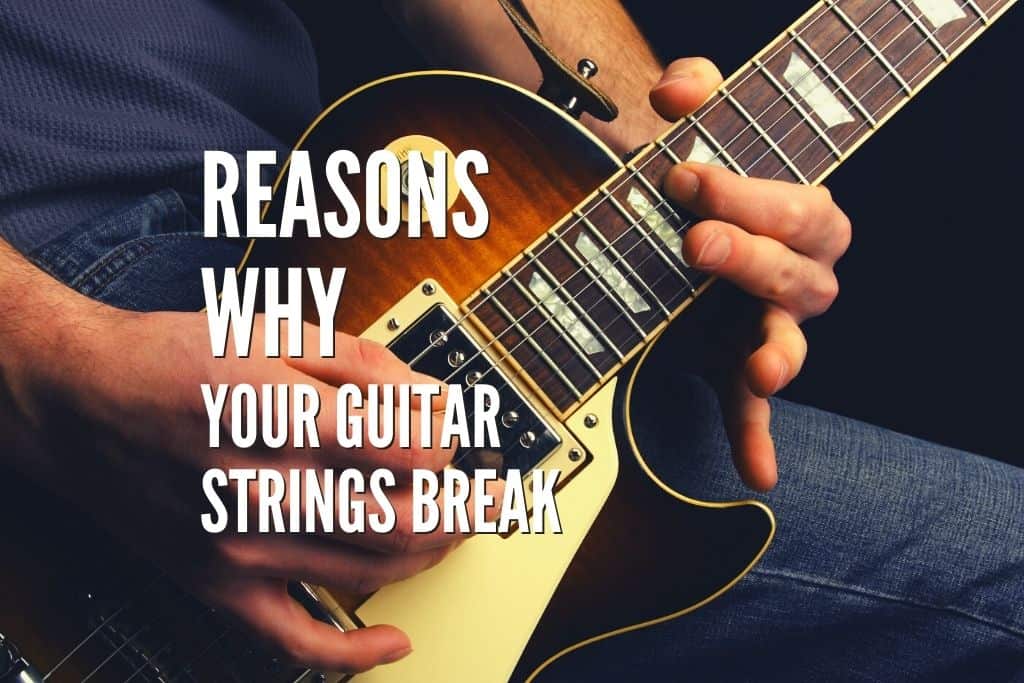 Strings are expendable. They break. You should never feel bad if your string breaks during the session. But the problem is that it might start to happen too often. If your strings break all the time, it might be a sign of a serious problem. But why do strings break? Is there a reason or a way to prevent it? Or at least a way to prolong the lifespan of a set of strings?

There are several factors that might affect the life of a string. Here we’ll go through the most common ones, along with the ways to prevent this from happening as often. Of course, if your strings break from time to time, there is no reason to worry. You will just replace the strings, and continue rocking.

If your strings always break at the bridge, well, you guessed it. The bridge is the problem. It doesn’t matter if you have a tremolo, Floyd Rose, or a fixed bridge. The edges on the bridge can cause your string to break. Now, if the saddles from your tremolo are sharp, they will cause deformation on the string, and it will break in no time.

The most common breakage will happen a few inches from the ball end of the string. A Tremolo bridge, for example, will have a ball end going through the hole, and then the string will bend over the curve and across the saddles. Wherever the string bends, there will be the highest chance of breaking. Furthermore, if the saddles are damaged, dirty, or with sharp edges, you can say goodbyes to your string after an alarmingly short period of time.

It is the same with fixed bridges. The balls would go through their little holes, and across the bridge where the breakage might happen. If this is something that is an occurring event for you, you might need to do something about it. Like always, sandpaper is your friend. You might be able to smooth the edges that are killing your strings.

Of course, if the bridge is rusty and in the terrible condition generally, you might need to replace it and get the one that will allow you to play the guitar properly.

For example, if you play guitar without using the vibrato, and playing chords only, you can probably see holes in the fret from where strings have “eaten” their way through the metal. Any deformity on the frets might cause the string to break. Similar to the nut problem, you can always level the frets and smooth any edges you have. If the single fret is the problem, sandpaper and file will do the trick. Since frets are usually silver and nickel alloy, there won’t be a need for too much force. You will level them in no time. Just be sure to protect the fretboard and not overdo it.

One of the most obvious reasons is string corrosion. Because some strings are made of metal and your fingers might get sweaty and oily, there is a chance to see rust on the strings. There is a certain percent of iron in regular strings, and they might oxidize over time. Naturally, they will lose their flexibility and sustain. You might’ve noticed that your strings have become a little dead after using the same set for a few months or longer.

The oxidation of strings, or rusting will make them weaker. Putting a strain on them will easily break them because they are already weakened. You can prevent this (well not completely) by cleaning them with some sort of string cleaner. You won’t be able to make a set last forever, but you will surely prolong their life.

It is normal for strings to break because of this. And regular cleaning and maintenance is just one of the ways to make them last longer, but not forever.

Fatigue is the loss of the ability to work inelastic part of the deformation. Any damage or inconsistency within the material will eventually cause the string to break. It is possible for the string to be damaged near or even inside the tuning pegs. While this is not some mechanical flaw, the string might break if you wound it incorrectly. Make sure that you’ve properly placed new strings to avoid unnecessary breakage. During the playing, there is the highest chance of string breaking on the tuning pegs and the bridge.

Related Post
If you wish to upgrade your tunning pegs you may want to consider locking tuners. you can check all the information in my following post Everything You Need To Know About Guitar Locking Tuners – 13 Q&A

The process is rather similar to the previous one. There might not be visible rust or anything, but the strings will grow old. Because they are made of metal or nylon, constant pressure, stress, tension, and oscillations will cause them to eventually break. If you ever took a piece of copper wire and kept bending it, you probably saw how easily it will break after a few bends.

Now the first two examples are almost inevitable. You won’t stop the aging of the strings and there is nothing you could do. But now let’s start with more serious problems that might occur.

If you are playing in some tuning other than standard, you might put extra tension on strings, and getting thin strings may be the reason they are constantly breaking. If you are experimenting with different tunings, be sure to get an appropriate set of strings. Otherwise, they might break because they aren’t meant to be used that way.

The solution for this is rather simple. Getting a different set of strings. It doesn’t necessarily need to be a different brand. Maybe the only issue is the string gauge.

The sharpness and thickness of your guitar pick will play a part in the strings’ lifespan. If you are using a thick sharp pick combined with extremely thin strings, you might have had a few breakages. Since the pick is constantly in contact with strings, you might want to find the one that is good for your strings too. Using metal picks can also cause your strings to break more often.

The way to avoid this problem is to simply go for either thicker strings or lighter plectrum.

It is not rare that the edge of a tuning peg is burred even on a new guitar. You can use the old (thicker) string to soften the edge. For the cleaning part, it’s always good to use a cotton swab to fully access the hole inside the tuning peg. By keeping it clean and smooth, you will avoid the constant breaking of the strings at the pegs.

Furthermore, if the situation at the pegs is too dire, you might need to get a new set of tuning pegs.

Can guitar strings break on their own while I’m not playing? This is a good question, and the answer is yes. But the reason for this is one of the mentioned above. There is no chance that the string will break without enough strain and stress. But if there is enough stress there might be a chance for the string to break due to the tension of the string. While usually there will need some kind of trigger for the string to break (like the ultimate tensile strength), it is possible that the string is so damaged that the tension will be enough for it to break.

The Nut Is Too Rough Or Too Worn Out

If the dirt is the main issue, you should remove any grime that might be on the nut. There are also sauces or lubricants that will make everything smooth and might lower the chances of string breaking. There is one more thing you can do – you can always file it down a bit. Smooth any sharp edges you have. Using sandpaper and a small file might do the trick.

Now there is an off chance that your strings are breaking at the middle of the neck or anywhere between the nut and the bridge. If you noticed that your strings always break at the same length (or same place), the specific fret might be a problem.

Since you are always putting pressure on the frets they are getting worn out quite fast. While it may take a few years before they need changing, depending on the play style they can get some serious damage.

We all know how annoying it is for the strings to break in the middle of the session. The best thing you can do is to try to locate the point where the string breaks. And remember, if it always happens in the same place, then you might want to address the problem to avoid annoying string breakage.