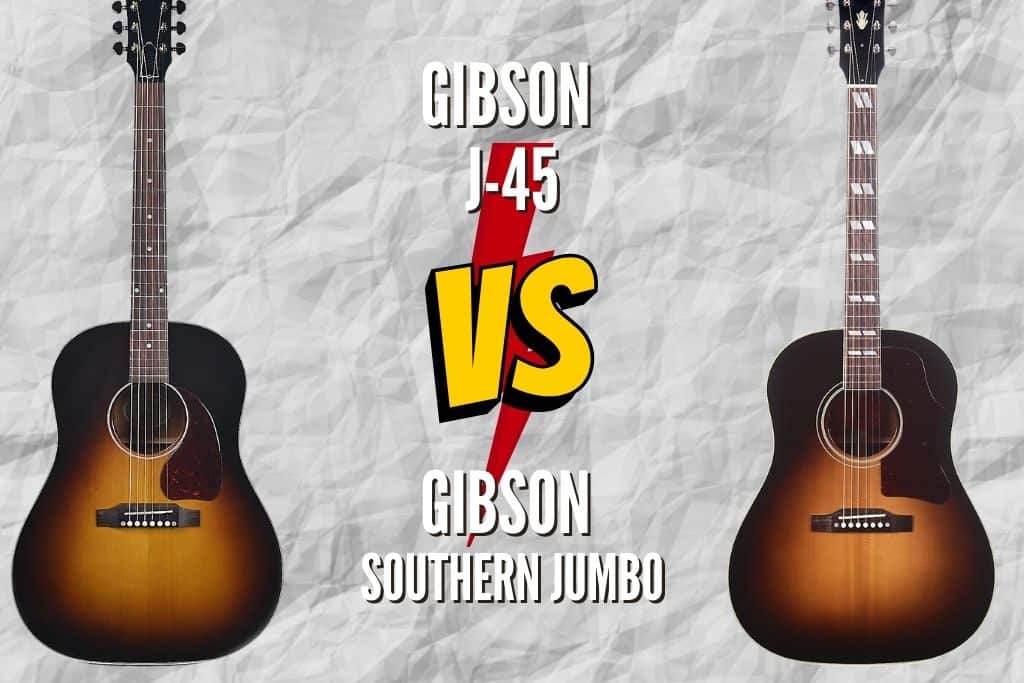 Gibson is among the top most influential guitar companies ever in guitar history. Almost every single guitar model this company made has made a great success. Sure, there are differences from model to model, but overall they had made a great impact on the guitar world.

Although this guitar company is mostly known for great electric guitar models, they are also quite famous for making great acoustic guitars. One of the best examples is the Gibson J-45 and Southern Jumbo models. The introduction of these models has sparked a debate in the guitar community with what is the difference between these two.

The J-45 model is part of the Moder Collection and the Southern Jumbo is introduced as a part of the Original Collection series which leans toward the classic Gibson guitar building. Visually, these guitars are almost the same and it is difficult to find differences from each other.

Both of the guitars share the same type of body shape and body wood as well as the neck wood and construction. So, in essence, these are almost the same guitars with a slight difference in the feel of the neck. The J-45 has a slightly bigger neck while the Souther Jumbo feels much slimmer.

These guitars have different tuning machines and fretboard inlays. The J-45 has the Grover Rotomatics with Kidney Buttons and dots inlays while the Southern Jumbo has Open Gear tuners with split parallelogram inlays.

Both, the Gibson J-45 and the Souther Jumbo are great examples of quality instruments. Choosing between these two is not an easy task to do. The guitars share many similarities in terms of the wood as well as the visuals with slight differences.

While these guitars look almost identical, this directly reflects the build. Almost everything is the same with these guitars. Both guitars have a Round Shoulder Dreadnought body shape with Mahogany sides and Sitka spruce top. This results in a great projection of the tone.

The neck material is the same but there is a different feel to each of the instruments. The neck material is Mahogany combined with the Rosewood fretboard which completest the sustain of these guitars. Adding a dovetail neck construction was the perfect choice for great acoustic guitar.

The scale length of both guitars is 24.75” with 20 Standard frets that are made out of Nickel silver. The bridge of these guitars is the same fixed type with the same saddle size so there is almost no difference between these guitars. The tuning machines of the J-45 are the Grover Rotomatics with Kidney Buttons and the Southern Jumbo it comes with Open Gear tuning machines.

Considering these guitars are almost built in the same way and the material used are the same, the only difference you hear is due to the different necks. The J-45 has a more rounded and bigger neck may sound different from Southern Jumbo just based on the mass of the neck.

Now, if we go further into the detail and try to nick-pick the differences, the J-45 compared to the Southern Jumbo has a slightly more accent in the mid-range which you can hear more when soloing apart from Souther Jumbo that dominates more in the low-end. Again, the difference is almost unhearable but it is there.

Gibson is known for having an amazing acoustic guitar sound that sets the standard in acoustic guitar manufacturing. The difference between these two guitars in terms of the tone is almost unhearable and will most likely not have any effect on your decision on which one should you take.

Gibson is known for making acoustic and electric guitars that are comfortable and every player will find a model that will suit his requirements. The same goes for the J-45 and Souther Jumbo guitar models.

Considering these guitars are among the high-quality guitar and have a rather high pricing range, you can expect these guitars to feel and play great. Yes, they do look the same and are built in a similar way but this does not directly reflect the feel.

There is a slight difference in the neck shape which as result gives a different feel to each of the instruments. The J-45 models will usually come with a more rounded neck shape that is slightly bigger than the Souther Jumbo neck. The Southern Jumbo, on the other hand, comes with a slimmer neck which some players may find more adequate for their playability preferences.

Both guitars are without a question great instruments to have and they feel and play great. You will not go wrong with choosing each of the models based on feel and playability only.

Comparing these two guitars visually, you will notice that both J-45 and Southern Jumbo have a lot of meeting points in terms of the look. Both have a round-shoulder dreadnought body shape that gives the guitar an hourglass look as well as the iconic Gibson headstock

Now, when you put the necks in a direct comparison you will notice that there is a difference in the types of neck inlays. The J-45 models usually come with dotted neck inlays while the Souther Jumbo is usually seen with split parallelogram inlays across the entire neck. The tuners for both of the guitars are completely different and give a different visual feel from one another.

Both guitars come in different finishes so everyone will be able to find an instrument that will suit his visual desires. Both guitars share the classic visual design and look of the many great Gibson guitar models

Gibson is one of the world’s two most well-known guitar manufacturers. They are more renowned for producing electric guitars, but this company’s acoustic guitars are among the best in the world. The same goes for the J-45 and the Souther Jumbo guitar models.

Finding a difference and deciding on which one should you take is not as easy as with other instruments. In essence, these guitars are built the same, almost look the same, and sound the same, and deciding in the may only be to your personal preference. Seeing and playing these models in person will give you the best answer on what is the difference.