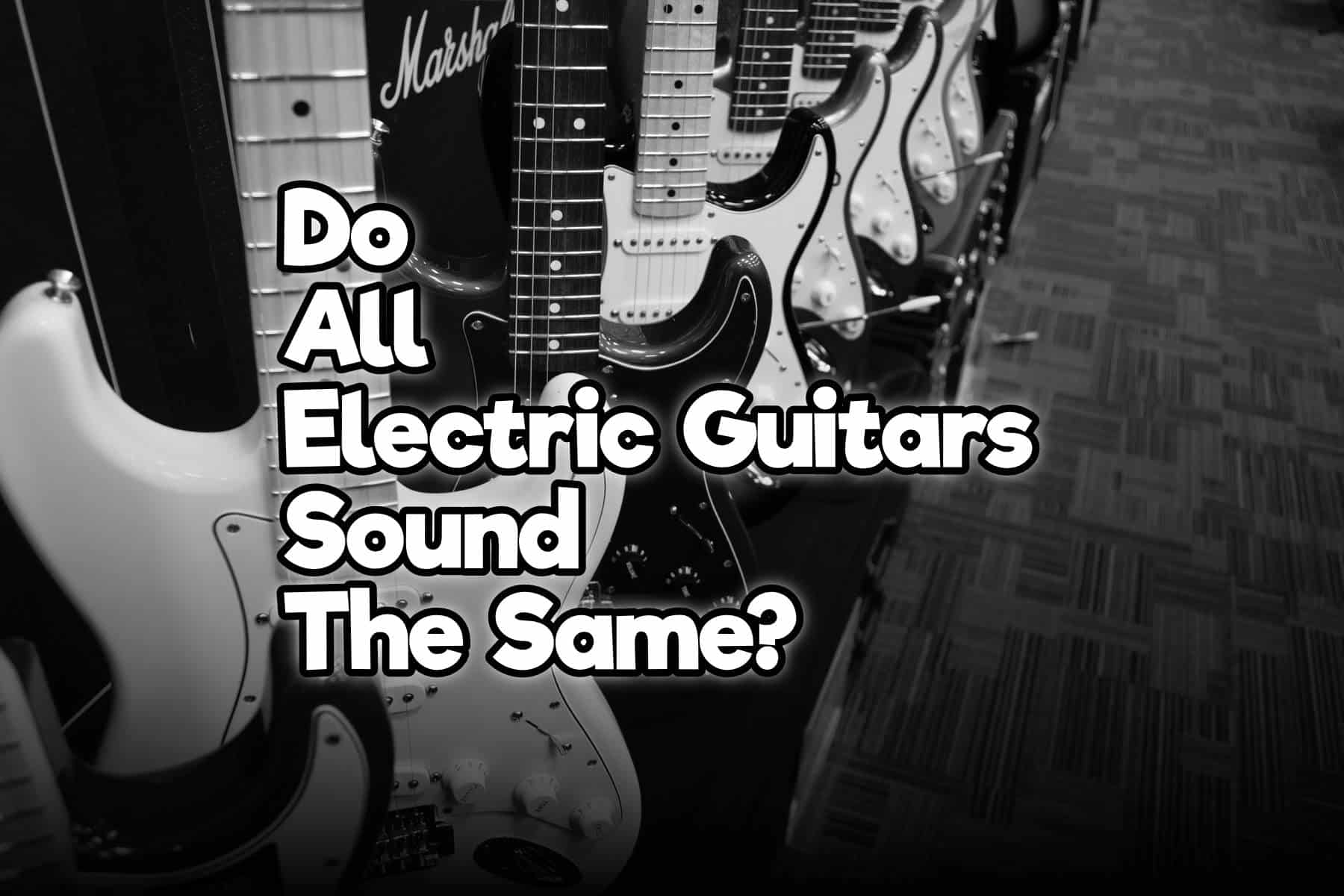 A lot of my friends and colleagues have often asked me, “Do All electric guitars sound the same?”. As a matter of fact, I used to think about this before I started playing them. So, I thought it would be a great idea to write a detailed article about this and help people with this question.

So, do all electric guitars sound the same? No, there is a large difference in the sound of different electric guitars. The following things impact the sound of the guitar. The pickups, wood and body shape, and other electrical components. However, the major factor is the pickups. Single-coil pickups sound different than dual-coil (humbucking) pickups.

There is a lot of art and subtlety that goes into the making of a guitar. A lot of very small things affect the eventual tone of the guitar. The density of wood, its size, the solidity of construction, the electronics, pickups, and the whole range of little factors like these contribute to the final sound of the guitar.

The single-pickup coil setup tends to generate a smooth response and pronounced high end. However, the strength of the field is low in this case, and as a result, you get a low output level and reduced low-frequency response.

The dual or humbucking pickup has two coils of wire, wound in opposite directions around one or more magnets. One in a clockwise direction, while the other in a counter-clockwise direction. This produces a stronger magnetic field and the result would be higher output levels, more pronounced lows, and a somewhat rolled-off high-frequency response.

So, to put it all together:

How Do Single And Dual Coil Pickups Sound?

Single coil pickups tend to have a crisper and brighter tone. While dual-coil or humbucking pickups have what can be described as a “thicker” sound; one that can be perceived as rounder or warmer.

Single coil pickups are often known for having more “bite” and attacks than humbuckers. Depending on the types of amplifier, effects, and playing techniques used. single coils tend to produce the glassy and chiming tones usually associated with the 1960s pop culture.

In this kind of pickup, piezoelectric crystals are used in place of magnets. They offer two advantages. Since they do not operate on the principles of electromagnetic, they do not need the use of metal strings. This is why they can be used on nylon-stringed classical guitars. As well as on the parker nylon fly and the Fender Yngwie Malmsteen nylon string Stratocaster.

Piezo Pickup are used to enhance the sound of acoustic guitars without introducing the decidedly of the non-acoustic sound of a traditional magnetic pickup.

P90 pickups find a middle ground between single and dual (humbucking) pickups. They have a higher output than single coils and lower output as compared to the dual coil. If we talk about tonal characteristics, then again P90 occupies a middle ground. It is brighter than humbuckers but more subdued than single-coil pickups.

This section describes two of the most common electrical components found inside an electric guitar.

Potentiometers are often abbreviated as “pots”. Pots are used to control a variety of functions inside an electric guitar. Usually, they operate or function as tone and volume controls. But can also be used to blend two pickups together, attenuate one coil of a humbucker, and so on.

Pots are differentiated by their electrical characteristics. I have jotted down two of the most important ones below.

Capacitors often referred to as caps have several uses. Their most common usage is in tone control, where they combine with the pots to form a low pass filter. This filter shorts all frequencies above the adjustable cut-off frequency to the ground.

Types Of Wood Contribute To The Sound Of The Guitar

The guitar is a combination of a lot of elements and all these elements have much to do with the guitar’s sound and tone. Here we will discuss the different types of wood used in the construction of an electric guitar.

Alder is the body wood of choice for Fender and was very popular in the ‘50s and ‘60s. Guitars made out of alder tend to produce warm and even sounding mids and lows. Alder sustains well without weighing a ton. So, I would say, it is tough to wrong with a guitar made from alder.

Ash is another favorite of Fender. Guitars made out of ash would have less bite in the midrange but will have a nice twang and good sustain. There are two types of ashes i.e. swamp and northern ash. Swamp ash is a softer wood and produces a much warmer tone. Northern ash is also used and it produces a bright, singing high sound.

Mahogany is the choice for Gibson Les Paul, Les Paul Jr, and SG. Mahogany produces an overall balanced tone. Nothing is missed from highs, mids or lows but nothing stands out either. Mahogany is neutral and powerful. Most single-cut guitars are constructed with Mahogany wood. Many Mahogany guitars have a maple top, which brings the best tonal characteristics of both kinds of wood.

Maple wood is very heavy and is usually used for fretboards. It is also used as laminate tops for other types of wood bodies. It has great sustain and stability. Hence it remains the wood of choice for Fender-style guitar necks. And I almost forgot to mention; Maple is on the bright side of the tone spectrum.

Rosewood is on the darker end of the tone spectrum and adds a nice balance to any guitar. It is an incredibly popular fretboard wood and offers fat lows and warm mids. Since the beginning of the rock and roll, rosewood has been a staple of guitar necks.

Solid-body guitars are made up of a single slab of wood. A classic example of solid body guitars would be Fender Stratocaster. Generally, solid-body guitars have a great sustain and are more resistant to feedback as compared to semi-hollow or hollow bodies. Due to this, they are a great fit for genres with more distortion i.e. rock and metal.

Semi-hollow guitars have an exposed opening, generally in the form of two F-holes on the top of the guitar’s body. A block of wood then runs down the inner chamber hence dividing it into two. A perfect example of this kind of guitar would be Gibson ES-335.

For those of you, who do not know about feedback. Feedback is a simple situation, where the volume of your amplifier is cranked up loud enough that the sound coming out of your speakers resonates through your guitar and vibrates your strings. Thus creating a cycle of sound that would never end.

Many people think of big jazz guitars when they hear about hollow body guitars. The real definition of a hollow-body instrument is that it does not have a block of wood running down the middle.

Hollow body guitars sound very similar to a semi-hollow guitars. The only main difference is that there is a higher presence of an acoustic-like tone in the hollow body guitars. They also create high feedback, which makes them not so fit for genres that require high levels of gain.

The cost of an electric guitar falls in the range of $200-$5000. For the average buyer, a guitar would cost something around $500. The lower-end guitar could go $250 and below. But, the top-end guitars that the pros use costs $2500 and above. For more detailed information you can read an article I wrote How Much Does An Electric Guitar Cost? Novice, Advanced, Pro

What is the most popular electric guitar?

Fender Telecaster is the most popular electric guitar of all time.

Does painting an electric guitar change the sound?

Painting an electric guitar does not change the sound. Pickups are the one that captures the vibration of the string and create a signal that goes to the amplifier. Color or paint has no effect on the sound of a guitar.

Is Electric Guitar Easier Than Acoustic?

The strings on electric guitars are softer than acoustic guitars. This makes playing the guitar easier on your fingers. Learning to play barre chords is easier on the electric due to the lightness of the strings.

2 thoughts on “Do All Electric Guitars Sound The Same?”