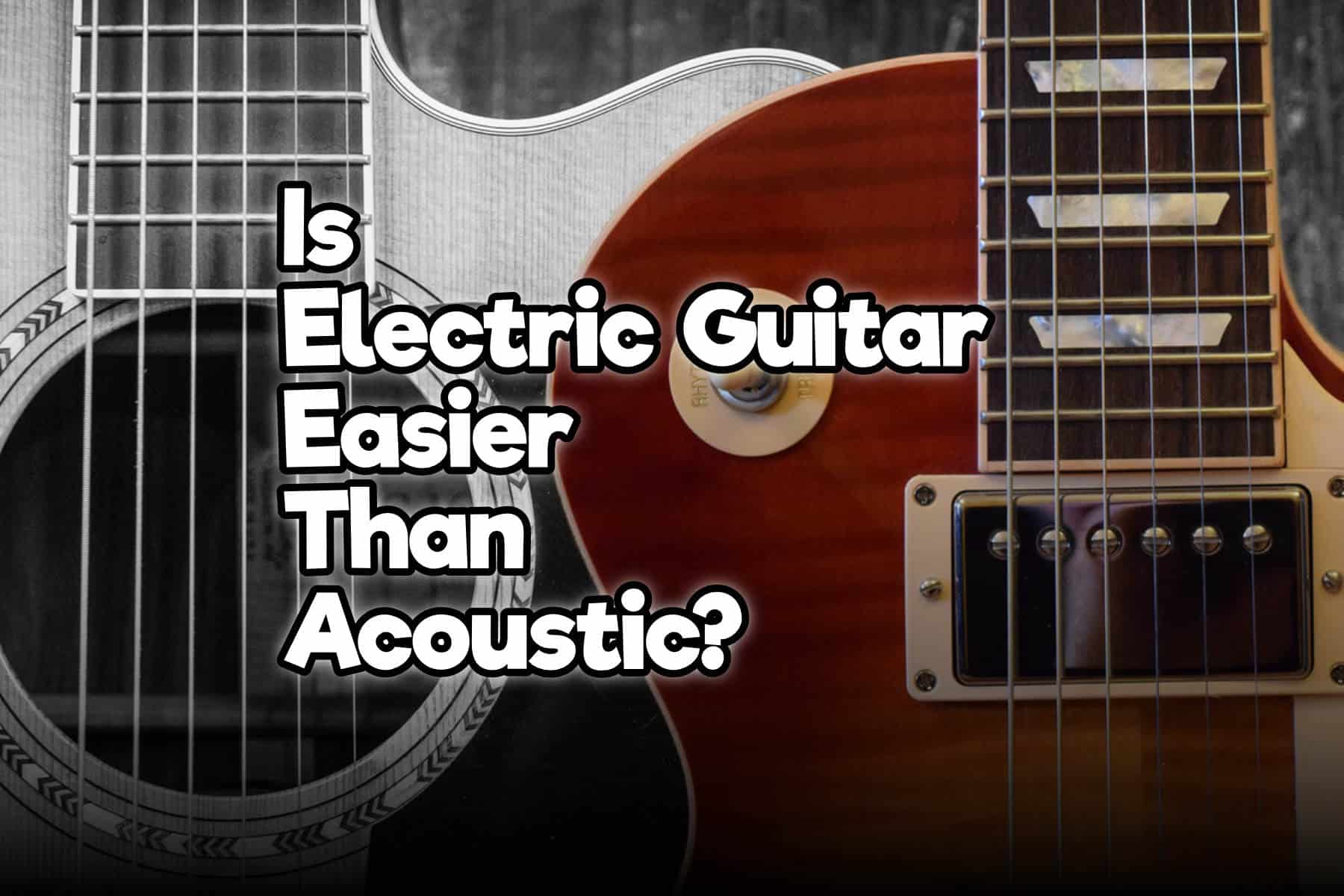 So, is electric guitar easier than acoustic? Generally speaking, playing an electric guitar is easier as the strings are softer and hence easy on your fingers. Learning to play barre chords is also easier with electric guitar due to the softness of the strings. But, I must say that the easiest guitar to play is the one you are interested in as it would have a major impact on your progress.

There is a physical difference between the two guitars and this could be one reason that people ask this question. Yet, I believe that the guitar you want to play is the easiest to learn. Anything can be achieved if you put your mind to it.

Electric Guitars Are Easy To Play

Electric guitars have smaller bodies, thinner necks and use lighter gauge strings and hence are easy to play. The pickups and an amplifier do all the work of projecting the sound. So a lighter touch along with lighter strings makes playing electric guitar a whole lot easier.

If we talk about Barre Chords, then I would say that Acoustic barre chords are harder. Acoustic guitars have thicker strings and are much harder to press down. Barre chords need extraordinary finger strength. So, it becomes a little harder for an acoustic guitarist.

Pros of Electric and Acoustic Guitar

Let us discuss some pros of electric and acoustic guitar

Pick your guitar according to your genre. Some guitars suit better for some genres than others. if you like rock music, metal, blues, and punk then you should definitely pick up the electric guitar. But, If you like folk, acoustic music, bluegrass, singer-songwriters, country then you should go with the acoustic guitar.

When strings of an electric guitar vibrate, they do not sound very loud at all. Solid-body guitars do not have sound chambers like acoustic guitars. To get around this, electric guitars use pickups.

Pickups are a coil of wire wrapped around a magnet. This wrapping of wire around the magnet creates a magnetic field in the immediate area surrounding your guitar strings. When you pick the strings of an electric guitar. The magnetic field gets disturbed and a signal is sent from the pickup to your amplifier.

This is the reason that electric guitars do not need bulky bodies like acoustic guitars. But this does not mean that the construction and woods used in electric guitars don’t play any role and are not important. The vibration of the strings is colored by factors such as the size, weight, wood of how the neck connected to the guitar’s body.

But, it is very easy to notice that aspects like pickups, an amplifier, and all the electric components within the guitar play a huge role in the sound of the guitar. A player has much more control over the sound and has a much wider palette of tones and effects to work with.

The wood used in the construction of an acoustic guitar also influences the sound of the instrument. In the world of guitars, these woods are called the tonewoods. The most significant tonewoods are used for the guitar top, back, and sides, plus fingerboard, neck, and bridge.

All these factors work together and create the sound when you strum the strings of your guitar.

Electric Guitar Techniques You Must Know

If you are starting out, then you should definitely try to learn the following techniques:

Brush Stroke: An alternative to strumming your electric guitar string with a pick is using your pick hand. This technique is called brush Stroke. Strumming the strings with something soft such as your pick hand produces a softer and more subdued effect.

Hybrid Picking: As the name suggests, this technique is a combination of using both the pick and the remaining pick hand fingers. It is more versatile than playing with a pick. This technique will allow you to play things that would otherwise be impossible to play.

Sweep Picking: Sweep picking offers you an easier way to play single or combination of note. The idea with sweep picking is to fret and ring out every note.

Economy Picking: Economy picking along with sweep picking allows an easier way to play a single note. It is a form of alternate picking, which calls for you to sweep the pick across strings when making your way to the next adjacent string.

What Counts Is Passion

As mentioned earlier in the article, it would be much easier to play a type of guitar that you are interested in. If are looking to learn something because it would be easy when you are not going to make much of a progress. For making progress, you need to have a ‘want’ for something. So, if you are inspired by and passionate about learning guitar, then the choice is yours. Only you can know, which guitar would be the easiest for you

Are the chords on an electric and acoustic guitar the same?

Yes, the chords on an electric and acoustic guitar are the same, given they are tuned the same. A ‘C’ chord on an acoustic is exactly the same as a ‘C’ on an electric guitar.

How long does it take to learn how to play the guitar?

Generally speaking, it can take up 4–6 months to master the chords and a couple of basic patterns. It can take up to 2 years to go from intermediate level to a master level. And this timeline is only true if you are taking time out for practicing daily.

How Much Does an Electric Guitar Cost?

The cost of an electric guitar falls in a range of $200-$5000. For the average buyer, a guitar would cost something around $500. The lower end guitar could go $250 and below. But, the top end guitars that the pros use costs $2500 and above. You can check out the following article about electric guitar costs.

Is there a difference between acoustic and electric guitar strings?

Can acoustic guitar strings be used on an electric guitar?

No, they can’t. Electric guitar strings are often three wounds and three unwound and are of the lighter gauge than acoustic strings. Bronze and phosphor bronze strings do not work well on electric guitars as pickups are magnetic and need strings with plenty of iron in them.

link to Expensive Guitar Vs Expensive Amp - What Should You Choose?

Not everyone is fortunate enough to just go and buy their dream guitar. We all know that guitar equipment can be quite expensive, and it’s not something you can easily afford. It is worth...

It probably happened to you, as it did to all of us, that you are unable to play the guitar on the amplifier due to a number of reasons. Your family member might be sleeping, you have grumpy...

This site is owned and operated by Jacob Sobolev. rockguitaruniverse.com is a participant in the Amazon Services LLC Associates Program, an affiliate advertising program designed to provide a means for sites to earn advertising fees by advertising and linking to Amazon.com. This site also participates in other affiliate programs and is compensated for referring traffic and business to these companies.