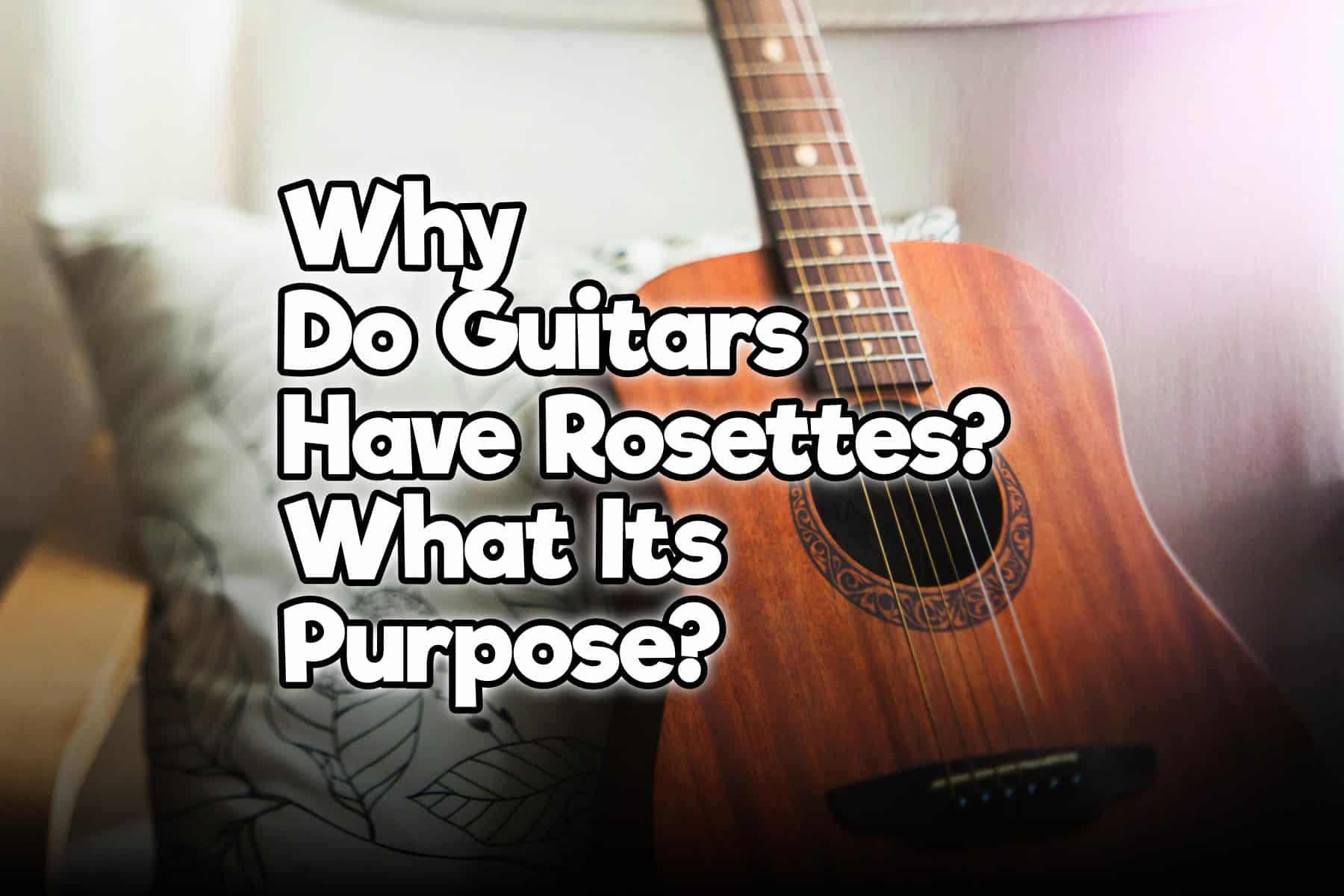 If you have an acoustic guitar, you probably noticed how there is a decorated part along the edge of the soundhole. This is commonly known as the rosette. Rosette is a French word and it means little rose. There was a tradition that originated in the baroque and medieval period where rosettes have been used on guitars, lutes, mandolins, and others.

But why do guitars have rosettes and what is its purpose? Originally, rosettes were used as a support to prevent cracking of the wood at the soundhole. Today, the purpose is different in one part, but still plays a role in protecting the wood.

Rosettes have been around for several centuries, and it became a tradition as well as a way for luthiers to express themselves. But of course, this isn’t the only purpose these little roses have.

The name originated inspired by church windows, which were commonly called rose windows. Since the medieval period, churches used decoration around the window’s arch, and later they started creating them with stained glass.

Similar to this, the luthiers started decorating string instruments around the soundhole, or even the soundhole itself. These decorations were called roses. It wasn’t rare to find a mandolin or lute with a carved soundhole, where there wouldn’t be a simple hole, but a carved decoration instead.

The main inspiration for the design was geometric patterns that commonly appeared in Islamic art. Furthermore, the patterns were usually symmetric and they have four sides at the beginning, but eventually started using six sides.

By creating the stop-gap in this part of the wood, and thus reinforcing it, they managed to protect the instrument and prolong the lifespan. Initially, they used a different piece of wood that had little or no grain exposure at all. Besides, the non-wood was also an option. The idea was to use materials that were less sensitive to humidity and materials like plastic, ivory, cellulose, and others were perfect for this.

Similarly to rosettes, many guitars have binding around the edges of the body or the neck. If you had a guitar for a longer period, you are well aware of how often it happens that you bump or hit something with the guitar by accident. And the parts that are usually damaged the most are edges or the parts that are sometimes protected with binding. Furthermore, both binding and rosette protect the guitar against cracks caused by a rapid change in humidity. While there are humidifiers available today, it wasn’t something that could be found in the medieval period.

Finally, it was easier to find purfling instead of the rosette in the guitars. Purfling was still used around the soundhole and the top plate. However, the backplate of the guitar was usually left without binding to make it easier to open the guitar during the repairs.

Related Post
If more parts of the guitar interests you, check out my post What Do The Dots Or Markers On A Guitar Fretboard Mean?

While there aren’t issues like this today, since there are so many ways to protect the instruments, somehow rosettes prevailed. Most of the acoustic guitars you can find today will have a decorated soundhole. While it won’t be easy to find the decoration in the whole itself, it is usually decorated around the edges.

Naturally, the need for protecting the instrument was reduced, thanks to modern technology and improved designs. However, these decorations remained and the idea of decorating the instrument became aesthetic. Marquetry, as well as inlaying, became rather popular, and you can find it today. We all saw the incredible tree of life on Steve Vai’s guitar or birds on Carlos Santana’s PRS.

Similarly, the rosettes became a part of most guitars as a way of simple, yet effective decoration. Acoustic guitars have little space where you can do something or make a change. Since we all expect to see something around the soundhole, this is an excellent way for a luthier to express themselves, but keep the instrument beautiful.

Furthermore, the luthiers began using the same rosette and all of their guitars almost as a signature. On the other hand, there are others that avoid branding the instrument and they create a new and unique rosette for each model.

Today, rosettes used are not having a purpose other than visual and to create a contrast from the rest of the body. You can find guitars with a traditional shape used for their rosettes today. However, you can find modern ones too. There are so many beautiful and unique designs available and each of them tells its own story. These little roses are one of the most beautiful ways the artists can express themselves without making the instrument to kitsch.

While most luthiers and craftsmen today will use different pieces of wood or pearl inlays or something that will show their skills and artistry, it is not rare to see the guitars where rosette is just a sticker.

Finally, creating something as beautiful and unique as rosette takes time and skill. One of the reasons is, of course, to increase the value of the instrument. As you can expect, the guitar that has a real mosaic of beautiful inlays in rosette will be much more expensive than the one where it was just painted.

Another interesting reason why rosettes are used today is to prevent vibration loss. Since there is a hole in the front plate of the guitar, the area is susceptible to vibration loss because the wood around that area is less supported. We already mentioned how great luthiers can create rosettes that will actually strengthen that area, but this also improves the ability of the guitar to retain energy.

When you play the guitar, the strings will move and the wooden “box” will resonate. Another thing that will happen here is that the soundboard will also move. However, the movement is rather limited and any way to conserve energy is important.

Rosettes will help a bit when it comes to vibration loss. Since there is so little a luthier can do, this will be rather significant, as the result will be a better guitar. There are many craftsmen claiming that this small improvement will help the guitar sustain longer, and the overall sound of the instrument to become fuller.

While there are many people who would disagree, and say that the only purpose of the rosette is to add visual quality to the instrument, the little rose will undoubtedly strengthen the soundhole.

Furthermore, there are luthiers that will create the rosette on the inside of the instrument as well. The other option is to create a larger inlay that is made from the harder wood than the rest of the guitar to further improve control of the vibration loss.

Creating something as complex as rosette is not an easy job. While at the early ages, rosettes were simple, the complexity and quality have only grown in the past few centuries. Today, there are so many choices and different shapes. Naturally, you can still find ones that resemble the old designs inspired by Islamic art, but there are others too. You could find the guitar with more simplified shapes that are modernistic and deliver a certain message.

Whatever the end result is, there is one thing that is certain – creating them is not easy. Creating rosettes will put luthier’s skill to test, as well as his patience, and artistic skills. There are people mentioning luthiers that managed to create rather complex shapes but always hid a mistake in the pattern. The reason for this was to show the similarity to the nature of the human spirit. There are so many things you could find out about the craftsman if you study their work, and rosettes are no different.

There are so many theories and ideas about the purposes of the rosette, apart from the obvious. Naturally, there are ones that claim that the rosette will turn the raw sounding instrument into a beautiful one.

On the other hand, there are players that swear that the guitar with rosette will sound a lot worse than the one without it. Furthermore, they say that the rosette is interfering with the natural vibrating of the wood and that it is something that diminishes the playability of the guitar.

The whole idea of the rosette is that the soundhole shouldn’t be vibrating as much and that it should be protected since it is more likely that the cracks will appear on this very spot. They serve a similar purpose as binding. Both bindings on the guitar and rosette should protect the instrument and make it look less naked and boring. While there is no doubt that the rosette will save the end grain from splitting, it is up to each individual player to decide if there is a difference in sound or not. It might be the best idea to try both and see which you like more.

In the end, even if rosettes don’t make any acoustic difference, the real ones will be a beautiful addition to the instrument. There aren’t many things in woodworking that are as subtle and complicated as creating a rosette.

Finally, it is worth mentioning the theory that rosettes were made out of paper before, and that the only purpose was to keep rats and other rodents from entering the soundhole and chewing the glue. Whatever the real reason may be, we can undoubtedly be thankful for the existence of rosettes, since they became a beautiful piece of art.

5 thoughts on “Why Do Guitars Have Rosettes? What Its Purpose?”