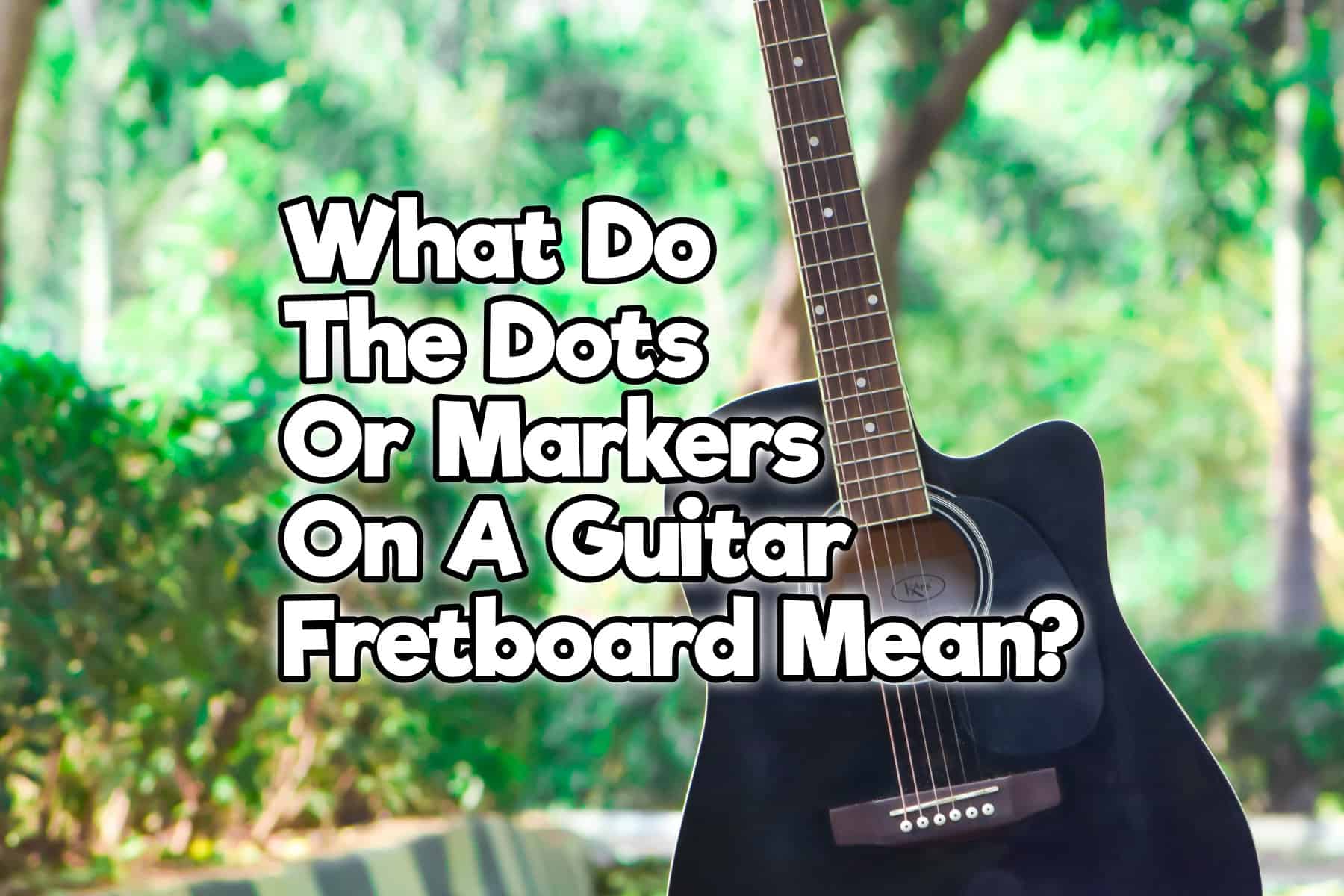 Both electric and acoustic guitars come with fretboard dots. These are sometimes called position markers. You may be wondering what these position markers do for you and why you have them on your guitar. There are several explanations for these white dots.

So what do the white dots on a guitar mean? The short answer is that the dots or markers are there to show the positions on your fretboard. These markers make it easy for you to locate these positions when you are playing the guitar. If your instrument doesn’t have these markers, it can be difficult to play in position especially for beginners. You will have to count the frets to find the location that you want.

These position markers on your instrument have other uses besides their main purpose. There are several things you need to know about these fretboard markers on your guitar.

Contents show
1 Meaning Of The Dots\Markers On Your Fretboard
2 Fretboard Marker Placement
2.1 Single Dots
2.2 Double Dot
3 Different Sizes
4 What Are The Fret Markers For?
4.1 Helps You Master The Fretboard Notes
4.2 Helps You Play In Key With Ease
4.3 Helps You Learn Guitar Faster
4.4 Tuning and Harmonics
5 Conclusion

Meaning Of The Dots\Markers On Your Fretboard

The dots or fretboard markers on your instrument show the position. They act as a visual guide when you were playing your instrument. it’s easy to know what position you are at by referring to the dots on your fretboard. It’s difficult to play guitars that don’t have fretboard dots. You have to count the frets to find the position that you want.  The main purpose of the dots is as position markers that you can refer to as you play.

The dots are quite helpful once you move out of 1st position where you play open chords. The dots help as you begin to learn other chords and scales on the guitar.

Related Post
If more parts of the guitar interests you, check out my post Why Do Guitars Have Rosettes? What Its Purpose?

You will find fretboard markers at various positions that are outlined below.

There are two different types of dots on the fretboard; there are double dots and single dots. There are single dots on the 3rd, 5th, 7th, 9th, 15th, 17th, 19th, and 21st frets. This will all depend on the number of frets your instrument has. Electric guitars have more dots than acoustic guitars. Twenty-four fret guitars have the most dots. You will have double dots at the 12th fret and the 24th fret if your instrument has that many.

There are different sizes of fretboard dots. Some guitars will have a small dots on the binding at the fret. Other guitars will have large dots on the fretboard itself. Fancier guitars may have different inlays to indicate the fretboard dots. For example, Jackson electric guitars have shark-fin style inlays and not dots. The inlays used all depend upon the manufacturer’s preferences.  Not every guitar has a plain dot or the same sized dot. Materials used include wood, plastic, abalone, or mother-of-pearl call Nacre.

What Are The Fret Markers For?

The fretboard markers have several purposes that you need to understand. These dots or inlays make learning the guitar a lot easier. They are not there to be mere decoration. You can use these thoughts as a visual and learning guide. you might not use them at first when you are learning guitar, but you will soon find them quite useful. Here are a few ways that these dots help you learn your instrument.

Helps You Master The Fretboard Notes

The fretboard markers land on whole notes for the most part. This makes it easier to locate notes when you play. You will need to know a little bit about music theory before you start mastering the notes. By using the fretboard inlays, it’s easy to learn the notes on the thick and the thin E string. These strings are the same E pitch.

There are no fretboard markers at the 8th fret this is note C. The fretboard markers would be too close together. This is why the next dot is at fret 9 which is C Sharp. You then go two frets and find note E at the 12th fret. Once you go past fret, everything repeats. the note at the 15th fret is note G. The next marker on the 17th which is note A.  the next note at the 19th fret is note B.

Helps You Play In Key With Ease

You could do the same if you were learning to play scales. For example, if you want to play the A minor Pentatonic scale you would play that at the 5th fret. This is the second fretboard marker.  Move the scale up to the key of B you would go to the third marker, which is the 7th fret. The markers make it easier to play in different keys. All you need to do is move your scales around to the right position. You can then play the corresponding chords that work with that scale.

Learning to play guitar is confusing when you’re new. it doesn’t have to be that confusing If you use the fretboard markers. they are there to be a visual guide, so you know what position you are playing in. Let’s say you’re playing a chord progression with the A and B barre chords. The 5th fret is A and that the 7th fret is B.  Use marker at the 5th fret and the 7th fret to move between the two barre chords. The same applies if you are playing power chords. A would be at the 5th fret, and the B would be at the 7th fret.

A lot of guitar music uses guitar tablature in the transcription. This is a numbering system which shows you where to play the notes. You can use the fretboard. To help locate those notes with ease. This makes it easier for you to learn songs that have tablature. Use the dots as your reference when learning the song. It doesn’t matter whether you’re learning rhythm guitar, solos, or other music. The fretboard. dots make it much easier for you to learn your instrument.

Now you have a full understanding of what the guitar dots mean. They are used as fretboard positions of markers in most cases. They can also help you learn your instrument and to help you tune your guitar.