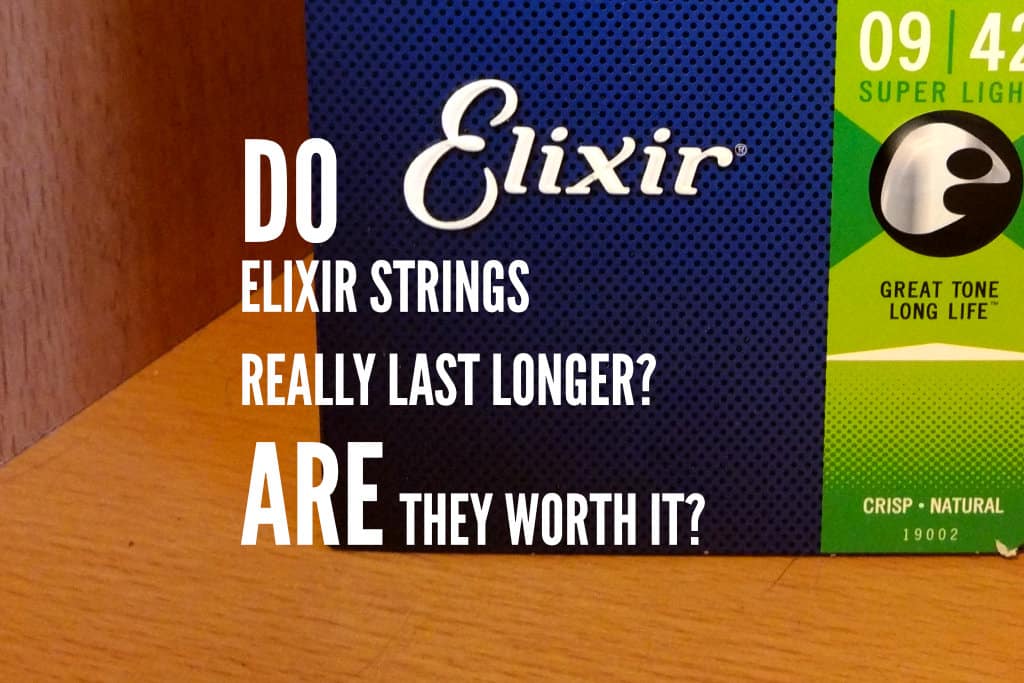 Strings are something all guitar players need. Unfortunately, they are also expendable. If you are playing the guitar, you should be aware that you need to change your strings from time to time. While most of us faced a difficult choice of picking a perfect brand, there are many who claim that Elixir strings are the best simply because they last longer.

So do Elixir strings really last longer and are they worth it? The answer is that Elixir strings can last and keep their tone double or even triple the time compared to other brands. In almost all scenarios out there are Elixir will be worth it because their lifespan will surpass 2 sets of regular strings.

I personally use Elixir strings and ever since I tried them for the first time it is hard for me to put anything else besides them, Let me tell you why.

The time you spend playing is a factor in the strings’ lifespan. If you play guitar every day for a couple of hours, you will have to change strings more often compared to someone who plays less often.

However, Elixir strings will keep the tone quality regardless if you play the guitar or not for a longer period than regular strings. This will allow you to postpone changing them until you feel that their tone is no longer what it used to be.

The second factor is whatever the player sweats during the session or not. If he/she does, the strings’ lifespan will be shorter than those who have dry hands. This is the main reason why people with sweaty hands can significantly benefit from using Elixir strings.

Naturally, maintaining your guitar is also an important factor, and if you use string cleaners and other products for maintenance, changing strings is something that you’ll need to do less often.

On average strings should be changed every 100 hours of playing, in other words about every 3 months. Of course, some players might use them longer, while others should change them sooner. But no matter how good you treat your guitar and strings, you will still need to change the strings sooner or later.

Of course, we prefer it to be later as possible with the addition that the strings will keep their tone as much as possible. If you are the average player, playing 1 hour a day and changing the strings around every 3 months with Elixir strings you will be able to play 8 to 10 months with one set or maybe even more.

Whenever you play the guitar, gunk will build upon each string and “suffocate” it. As a result, the string will lose both feel and sound over time. Many brands that use some kind of coating are not properly protecting each winding of the string. While it might last longer, it is between fully coated strings and uncoated ones.

Elixir managed to find a way to coat the entire string. This way, gaps between the windings are protected, and strings are able to keep their mechanical properties even after a while.

This coating will act as a physical barrier between each winding of the strings, and as a result, there will be no way for skin particles and debris to get trapped.

The company has been working on this type of protection since 1997, and today, no one can do it better. It is proven that Elixir strings will extend the strings’ tone life like no other brand. This counts for both treated and coated strings.

Are Elixir Strings Worth It?

Since the strings last a bit longer they have a special protective coating over them. As a result, the price is also higher around double the price of uncoated strings from other brands. Naturally, the main question arises, are Elixir strings worth it or not?

To summarize, I have created a table where I compared Elixir strings price to other uncoated strings from other brands. At the time you read this the price may change a bit so make sure to check the current price through the links provided in the table. But I believe that the difference between them in percentage will remain the same.

In order for me to answer the question of whether they are worth it or not let’s consider the following scenarios.

If you are the average player playing for about 1 hour a day, then that means that you change your strings about every 3 months. With Elixir Strings, you can push the strings to 8-10 months before you need a new pair. Because Elixir cost around double the amount regular strings do and you suppress the lifespan of 2 pair of regular strings then they worth it

Another example is if you play the guitar casually or you own several guitars that one of them you play from time to time and you want to maintain it’s the tone for as long as possible.

With regular strings, after several months of not playing it or playing it from time to time, the strings will become dull. Whereas with Elixir strings you will maintain the original tone for several years.

Even for a professional musician who performs regularly, for example, Ed Sheeran or other musicians these strings are worth their value. Instead of replacing the strings with each performance you can replace them every 3 or 4 performances. I would say that in this situation it is less about the money and more about the time it takes for a new set to settle in.

As you can see it is hard to say when those strings will not be worth the money. Maybe if you have really dry hands and you maintain your strings regularly. In addition, you play more than 1 hour a day which will force someone with sweaty hands to replace those strings every 2 months.

But you replace them every 4 months or more, then maybe those strings will not matter so much to you. But even so, I would recommend you try at least one set and see the result for yourself.

The company offers many different types of strings for both electric and acoustic guitars. While they don’t offer as many options as some other brands, it is still possible to pick one of the most popular types. If you wish to hear the different types and compared them between them and uncoated strings you can visit The Elixir Strings Sound Xperience at their website.

When it comes to acoustic guitars, the strings come in three types:

All strings for acoustic guitars come from .010 to .013 gauge including .16 for resonator guitars.

Each type of strings offer a different gauge size, and the players can pick between .009 and .012. Elixir brand covers the most popular string gauges. Unfortunately, if you are used to playing something a bit more unusual, like 0.08, you won’t be able to find one that Elixir offers.

Saying that one type is better than the other would be wrong since each has something unique to offer. The most important question is your music style and taste and based on that, you should pick one of the types that Elixir offers. Each of the coatings creates something different, and there are advantages and disadvantages to each. Naturally, the most important question is what you like.

What Are The Alternatives To Elixir Strings?

Several other types of strings that use protective coating are D’Addario, Dunlop, and several others. There are three types of strings available in the market – coated, treated, and uncoated. For example, Cleartone offers treated strings that went through a similar process in order to protect them. The other type similar to Cleartone is La Bella with their Vapor Shields strings.

If you are looking for coated strings like Elixir, you can always try D’Addario. The company is known to create great accessories for guitar, and many players prefer their products and strings.

Finally, there are uncoated strings. While they won’t have the same lifespan, the gauge options and price is a lot better. There are many guitar players who prefer the uncoated sound of strings, and there is no doubt that there is a difference in playability and feel.

Of course, it all comes to personal preference. If you are looking to try uncoated strings, then the best choice might be Ernie Ball or Dunlop. Both companies create various types with different materials and string gauge that varies from 0.07 to .013.

However, for all players that want to change strings as less as possible, while having the feel and sound of newer strings, there aren’t any other options. Other brands are simply different and offer feel and sound that is unique to their brand.

Unfortunately, you won’t have a chance to find something that will last as long as Elixir, while playing the same. On the other hand, if you love the way Elixir strings sound, then you should simply stick to Elixir’s brand.

Related Post
if you are not entirely sure how to change the guitar string on your guitar, then check out my post How To Change Guitar Strings (Electric, Acoustic, Classical)

Elixir strings can last maybe double the time compared to other types. While most agree that players should change strings after one hundred hours, it can vary depending on the playstyle, conditions, and several other things.

While Elixir strings can undoubtedly last longer, the price is quite higher compared to other brands. There are many players who prefer not having to change strings as often, and the higher price is something they are willing to pay. Saying that Elixir strings are not worth would be wrong since each player has their own preference and taste.

However, if you are interested only in the longevity of strings, Elixir will undoubtedly last longer compared to almost any other brand.

5 thoughts on “Do Elixir Strings Really Last Longer? Are They Worth It?”

Finding a perfect tube amp is never easy, especially if you have a limited budget. Most players would always go for a Twin Reverb or something equally good, but not everyone can afford to spend a...