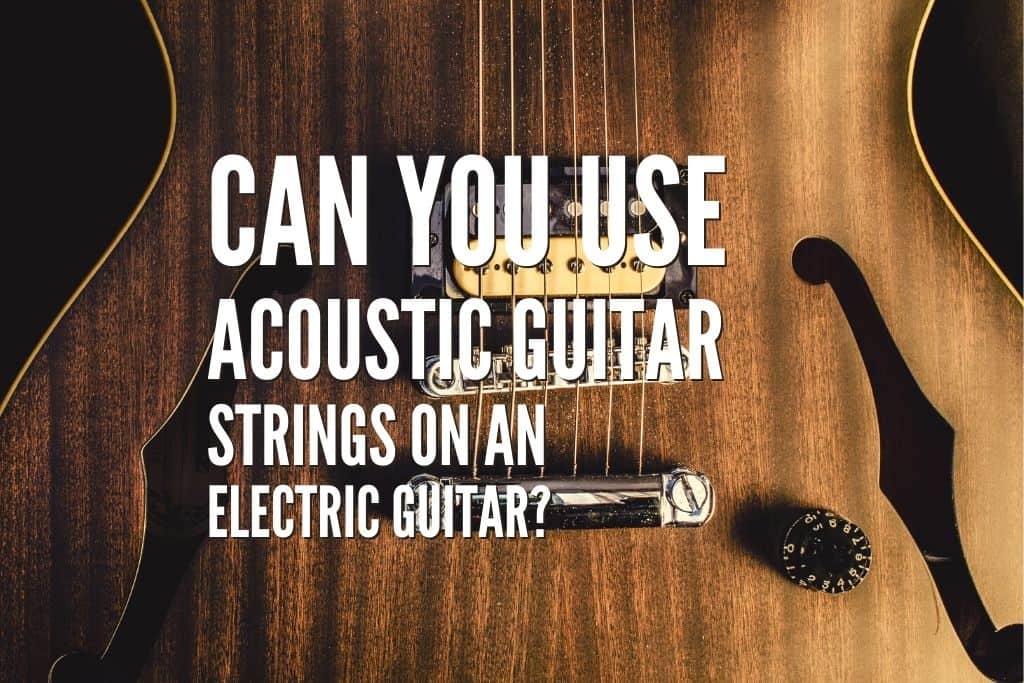 Are you about to put acoustic guitar strings on an electric guitar? If yes, then it’s a good idea for you to know what might happen, and what sound you are going to get.

Therefore, what you are going to get is a sound that you actually don’t want to hear, and maybe even waste your money on guitar strings that don’t do the work as you want them to. So, you should consider some things that are listed below, before putting acoustic guitar strings on an electric guitar.

Do Acoustic And Electric Guitars Use The Same Strings?

What Happens When You Put Acoustic Strings On An Electric Guitar?

Putting acoustic strings on an electric guitar will affect your sound, that’s for sure. So, first of all, you will get a low mid-range tone. More tension on your guitar’s neck will be, so you might need to adjust the truss rod.

Besides that, acoustic strings have a heavier strings gauge. That will make your strings stiff and harder to bend. You will lose the proper resonance because of the difference in the acoustic and electric guitar string material.

Some players say it was harder to play, clarity was gone, and strings wouldn’t stay in tune for a long time, which is pretty inconvenient for everyone.

Will 80/20 bronze strings work on an electric guitar?

Many of the acoustic guitar strings brands use a material called 80/20 bronze. It is actually the same as brass. Brass is made from 80% copper and 20% zinc, and that actually covers the “80/20” of the term. This material gives the strings a cutting and clear sound.

The heart of an electric guitar is the pickup. Strings’ vibration is transformed into electric currents by it. It is possible if strings have a plating of a magnetically active metal, such as nickel or steel. Pickups work on a magnetic output, so they use magnetism to create the signal for the amplifier. As the string vibrates, it causes fluctuations in the magnetic field, and it induces the fluctuating current in the pickup coil.

Will phosphor bronze strings work on an electric guitar?

Like the 80/20 bronze strings, phosphor bronze strings don’t have magnetically active components, except for the steel core. The pickups won’t read them very well. The signal will be weak and muddy. You will be disappointed, and you will waste a fine set of new “phosphors”.

The answer is yes; phosphor bronze strings will work on an electric guitar, but not in the way you want them to work.

What Adjustments Do You Need To Make On Your Electric Guitar After Putting Acoustic Guitar Strings?

There are many reasons why people might want to use acoustic guitar strings on an electric guitar. Maybe they want the electric guitar to sound like an acoustic one, or they just love experimenting.

The solution is the proper setup that involves multiple services such as adjusting the neck and raising or lowering the string height.

First of all, we will talk about the string gauge size. It has to be close to the standard electric string tension, so you won’t have to do so many setup changes. The heavier the gauge of string, the more tension.

String up your guitar and bring the strings to pitch, watching the guitar nut and bridge saddle very carefully and closely. That is very important because you have to be sure that there isn’t any binding that will cause any of the trouble.

After that, please check the neck relief. In order to correct for different tension, you’ll probably have to make a truss rod adjustment. But if you make sure the acoustic guitar strings have a lighter gauge size, it will be easier, because of the reasons named above. Play every note on the fretboard. Also, make sure that notes don’t have excessive fret buzz.

And yes, we can say that the electric guitars need metal strings to work adequately, but not any of the metal strings. The plating metal must be magnetically active. Precisely, it has to be made of metals such as steel or nickel so the sound wouldn’t be weak and muddy.

What Is The Difference Between Acoustic And Electric Guitar Strings?

A string gauge size is how thick the string is. The thicker a string is, the warmer its response will be, and the more volume it will produce. They are also stiffer. Thinner strings are brighter and easier to play. Different types of guitar utilize different string gauges.

How Do Acoustic Guitar Strings Sound On An Electric Guitar?

Can I Use An Acoustic High E String On An Electric Guitar?

Is It Okay To Put Electric Guitar Strings On An Acoustic Guitar?

Some people want the acoustic guitar to sound like an electric one, some of them say that is easier and less painful to play the guitar with the electric guitar strings, or they just love experimenting.

You can break the guitar nut by shoving too large a string into a too-small nut slot. But, can too small of strings damage a guitar? No, not in a short term. Prolonged use of too small strings will start to create grooves in the nut slots, and also on the bridge saddle.

These new grooves aren’t dangerous in themselves, although you may get some strange buzzing and intonation issues. But when going back to the correct gauge, it’ll be like a too big string in a too-small slot and you’ll run the risk of splitting the nut or chipping the saddle.

The electric guitar does not use the same strings like an acoustic guitar. The key differences between them are the material they’re made of, the guitar string gauge size, and the number of wound strings.

Strings are a tricky and often-debated subject. It is good to know the differences between guitar strings because the differences are designed to bring out the instrument’s best.