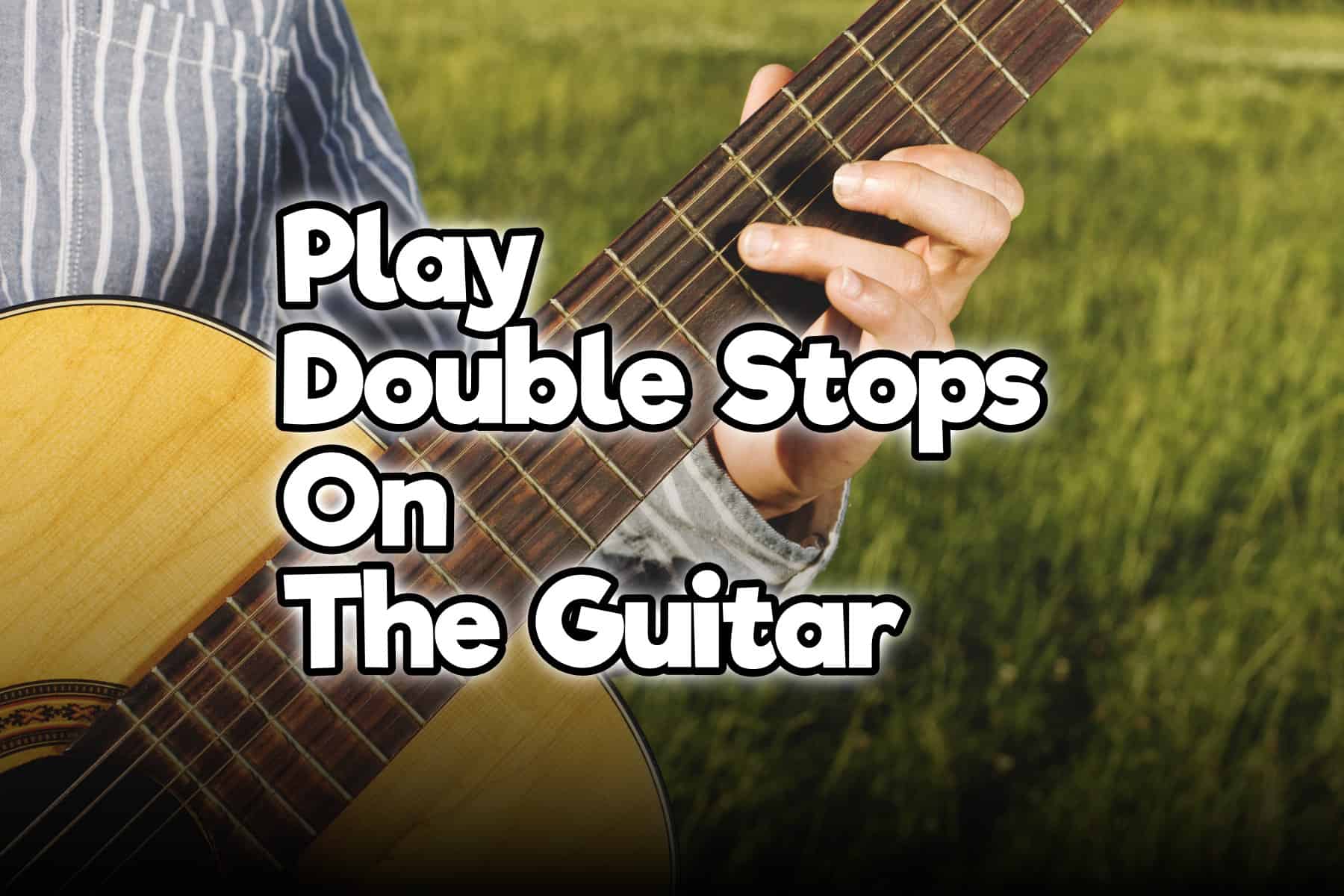 You probably heard a lot about double stops on the guitar. They are rather popular in music genres like blues and rock. But the question is what are double stops and how can you play them? Are they some mysterious technique?

So, how to play double stops on the guitar? A double stop is a technique of playing two notes at the same time on the guitar. When you play a solo or improvisation, you would usually play one note at a time. Using the double stop technique would allow you to play two strings simultaneously.

There are several ways you can do this. The most important thing is that you still have to play the notes in a scale and in a key the song’s in. Furthermore, you can use several licks that will allow you to create beautiful guitar improvisations.

Double Stops Along The Neck

The first step of perfecting the double stop technique would be to practice across the neck. You would play using only the fifth string A and fourth D. For example, if we take a look at the C major scale, we should start with the C note. This time, we will use the “C” note from the C major scale which is the first fret of the B string.

From there on you would proceed to create a double stop for each note. Now, double stops are actually two-note chords or a dyad or diad.

If we take a look at the notes only and ignore semi-notes, we can play double stops for each of the notes using the fifth and fourth string only.

The first diad in the scale is C combined with major third or E which is played as on the A string. As you can see, the diad is a shorter form of the standard triad chord which would have the root or the C note, a major third or E, and the fifth or G. Here, we would play only the first two notes of the triad in order to get the shorter version or the double stop.

The second one is a minor dyad where we would play the fifth note on the A string (D note) and the third fret on the D string (F note).

The fourth diad is major, so we would have the 8th note on the A string or F, and the seventh note on D string or A.

The sixth and seventh are minor and the eight is an octave.

As you can see, we would basically play the entire C major scale on the B string and it is followed by the full notes on the high E string since C major scale won’t have any semi-notes.

Double Stops Across The Strings

While playing like in the previous example is usable, it is rarely played in its entirety across the neck. However, you can do the same thing and apply the same logic to play the C major scale across the neck using all strings.

As in the previous example, we would start with the root note and the major third. But this time we would play the C note on the low E string, which is the 8th fret of the sixth string. To create a diad we would need a major third which is E note or the seventh fret on the fifth string.

The sixth and seventh are major, still played on the second and third strings. Finally, we would play an octave which is on the first also on the third and second strings.

This is a more common way of playing full stops, where you’ll use all of the strings to play these two-stringed chords. Both the first and second examples are using the same notes. We only changed the octave for the root note, but in theory, they are the same. These are also called double-stop thirds because we used the root and the third to build each of the diad chords.

Related Post
Many electric guitar riffs use double stops, you can find them in my post 33 Famous & Easy Electric Guitar Beginners Riffs With Tabss

As you can see, these are also diads and they are based on the same logic as the previous one except we would use fifths instead of thirds and we won’t have root’s octave played.

Octaves are another interval where you could use diads. Basics for playing octaves is easy. You would play one note, C for example and the second note would also be C, only an octave higher.

When you play octaves on the sixth and fifth strings, you could easily find the octave by skipping one string and playing the note that is two frets higher. For example, the C note on the A string is on the third fret. The octave is on the third string on the fifth fret.

When you play octaves on the fourth string, you would still skip one string after playing a note, but you would play a note that is three frets higher from the fret that you’re playing. Let’s take the fifth note on the fourth string or G. The octave higher would be on the second string, 8th fret. The same rule applies to the third string.

Attention
if you are looking for your next gear or an accessory that can improve your playing experience but you are not sure what it is exactly, make sure to check my post Top 27 Must Have Guitar Accessories For Every Guitarist

As you can see, the options are almost limitless. You could apply this technique for combining any two notes from the scale and you’ll get a double stop.

If we take another example we will get to fourths. We can use fourths to go through A minor pentatonic now and see what happens.

Since we already went through thirds and fifths, it would be a shame not to mention fourths. Using the same logic as before, we would go through the scale and use the fourth note as the second part of the diad.

You can use this to combine any scale you want and practice each of the intervals across the strings and across the neck. Not only that you’ll have plenty of new options for playing solos, but you will also perfect your music theory and expand your knowledge.

Bending technique is something blues guitarists can’t live without. This is taking everything to a new level. If you already mastered the bending technique, now you can improve it even more.

There are several ways you can bend the note. Or more accurately, where you might end up. If you bend one string, you can bend it for half a step only, or bend five or more semitones. While two and a half note bends aren’t that common and are extremely difficult to perform, it is still an incredible technique.

Of course, there are other types of bends like reaching that blue note that is in between the minor and major third of the scale. The most difficult part of the bending is hitting the right pitch.

Now, when we talk about double-stop bends, things can get even more complicated. For example, one of the options you could do is bend two strings at the same time. The easiest thing is to bend both strings on the same fret half a step. After that, you can practice bending it both one step.

The third part of the exercise is to bend both notes but one half a step, and another for a full step. Now, this is where things get complicated and it’s normal that you won’t be able to play this since it is quite complex.

Playing double stops can go from being extremely easy to extremely hard. Perfecting more advanced bends will give you nightmares and sore fingers. Bending notes has always been the bane for beginner players and it is normal that you have issues with it.

Since it is quite hard for a beginner player to know when to bend and when to stop. Depending on the note in the scale you can bend some notes half a step, while others will sound out of tune. Take your time and practice. Especially if you plan on diving into advanced bending techniques.

Of course, you can always experiment with different intervals played as double stops. Don’t forget that you can play any interval you want. We only mentioned a few most commonly used, but there are still sixths and sevenths and everything you can imagine.

Naturally, you will have to practice a lot to perfect all of them. It probably sounds a bit complex and too theoretical, but once you start practicing and experimenting, you will realize how much you learned and how much you’ll able to improvise and add to your previous guitar knowledge.